Mentors in Violence Prevention (MVP) is one of the original gender violence, sexual harassment, and bullying prevention programs. It was first developed as a sports culture initiative in 1993 by Dr. Jackson Katz and his colleagues at Northeastern University’s Center for the Study of Sport in Society. The program was later expanded to include students and professionals in college, high school, the military, and a variety of organizations in the public and private sectors.

MVP Strategies is the flagship organization which provides training to organizations including the US Military, colleges, high schools and professional sports leagues. Other branches and initiatives of MVP include MVP National, Sport in Society, Center for Violence Prevention at the University of Northern Iowa, and Griffith University in Brisbane. 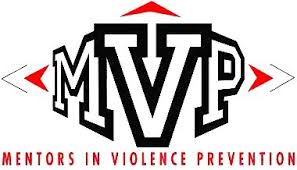 The program focuses on interactive scenarios and group discussion. There are no videos or live presentations.  MVP offers an array of training options for both students and administrators which can be customized to fit the needs and structure of your campus community. Generally, MVP co-presenters lead the audience through discussions of realistic scenarios covering a range of abusive behavior they might witness as bystanders. Once individuals are trained to present the program to student groups, MVP recommends teams of 2 volunteers per discussion group. Scenarios in the MVP Playbook describe a situation followed by a section entitled "Train of Thought" which discusses factors a bystander might consider in the situation. Next, the Playbook lists "Options" of several actions the participant could take. Usually, one of the trainers will ask a participant to read the scenario out-loud, followed by another participant reading the train of thought. Then, the group discusses the different options available, and what the participants would do as bystanders.

MVP strongly emphasizes the importance of gender stereotypes and cultural conceptions of "masculinity" and "femininity" in addressing the root causes of sexual violence. Several of the scenarios focus on commonly held stereotypes of women, how the culture encourages and rewards those who tell sexist jokes, and engage in behavior that is stereotypically "masculine."

The authors recommend a minimum of three sessions for the target group, with each session no more than one month apart from the previous one. Sessions last approximately 90 minutes.

Implementation depends on the specific type of program selected  (i.e. small scale workshop vs big room presentation). The basic format of the Student Leadership programs requires the purchase a training guide which explains how to run the program. Discussion guides, or "Playbooks", are purchased for the participants. Group discussions are conducted using scenarios from the Playbooks.

"Big room" presentations: These large scale talks follow a classic lecture format and are recommended to be implemented in tandem with intensive, targeted workshops and programs.

Student Leadership Training: MVP offers one day intensive trainings to student leaders including athletic team captains, Greek leaders, student government representatives, and RA's. These workshops are "designed to enhance the leadership capabilities of student leaders by helping them develop bystander intervention skills but also by challenging them to see themselves as leaders in the critical area of gender equality promotion and gender violence prevention." (MVP)

Leadership Training and Orientation Programs for College/University Administrators: Leadership and violence prevention training is designed for senior administrators from all reaches of campus. Programs focus "on the role of institutional leaders in the prevention of gender violence and other forms of bullying, abuse and harassment with a special emphasis on men’s leadership. Participants are introduced to cutting-edge pedagogical as well as institutional strategies." (MVP)

The research that is available is not in peer reviewed academic journals. One study of fraternity men and sorority women reported lower levels of sexism and an increased belief that they could prevent male violence against women after taking the MVP Student Leadership program (Cissner 2009). There is also a 2001 study that claims effectiveness, but it was never published in a peer-reviewed journal (Ward 2001). Other assessments by the Department of Education suggest participants in the peer education program, thus receiving more intensive training than general student leadership trainees, show more significant improvements in behavior and attitude (Cissner, 2008). Both peer educators and workshop participants did improve as proactive bystanders and provided positive feedback after participating.

MVP uses several methods that the literature suggests are highly effective: single-sex programs, and a focus on bystander intervention.

MVP has been used at numerous colleges and universities, including:

Compared to other programs - e.g., those in which an administrator can bring trained actors to campus to act out scenarios of sexual assault in front of a large audience - this program requires a much greater time commitment on behalf of the administrator. Volunteers need to be trained, and ideally those volunteers will run several sessions for the participants, each of considerable length. Identifying student leaders and investing in intensive training may require time on the front end but could make shifting culture much more efficient in the long run by using existing cultural structures on campus.

MVP utilizes some of the techniques that existing research deems the most effective in reaching students. Their programs have a strong core philosophy while being malleable enough to adapt to specific audiences and institutional needs. They are interactive and if administered properly will effectively engage the students to take an active role in the discussion about sexual violence.

Center for Court Innovation. (2009). Evaluating the Mentors in Violence Prevention Program. Cissner, A. B Retrieved from http://www.mvpnational.org/wp-content/uploads/2011/12/DOE-MVP-Eval-Report-2008.pdf